Welcome to the uncanny – but at the same time very enjoyable – world of Lantern Rec., a new way of dealing with past music. Long gone but not forgotten, a number of records that traced the collective hysteria of the post-punk revolution, setting the way for a more contemporary approach. Being the industrial dub of some On U Sound alumni, the neo-goth romanticism or the so called art rock laissez-faire. Here are the first chapters in a long series of rediscovery. 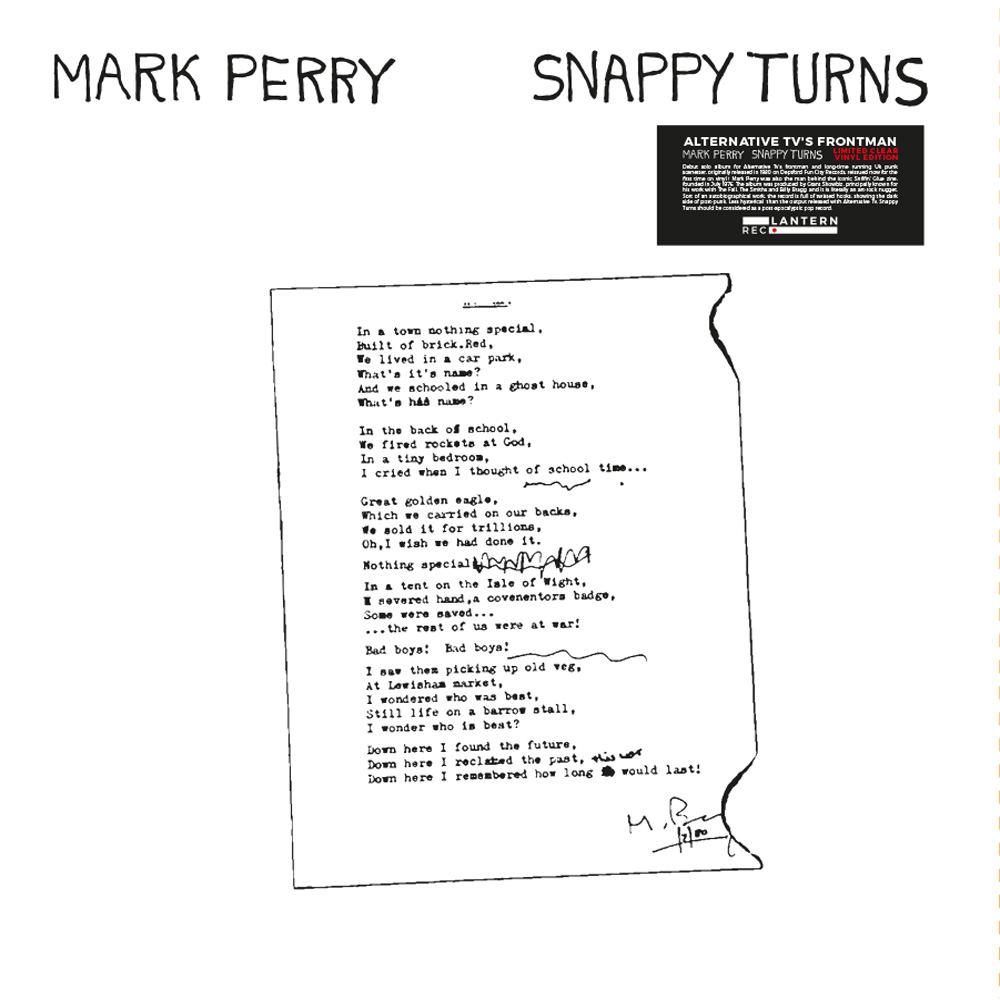 Debut solo album for Alternative Tv’s frontman and long-time running Uk punk scenester, originally released in 1980 on Deptford Fun City Records, reissued now for the first time on vinyl ! Mark Perry was also the man behind the iconic Sniffin’ Glue zine, founded in July 1976. The album was produced by Grant Showbiz, principally known for his work with The Fall, The Smiths and Billy Bragg, and it is literally an art-rock nugget. Sort of an autobiographical work, the record is full of twisted hooks, showing the dark side of post-punk. Less hysterical than the output released with Alternative Tv, Snappy Turns should be considered as a post-apocalyptic pop record. This reissue contains two bonus tracks : “Whole world’s down on me” and “I live- He dies” from 1980’s single. 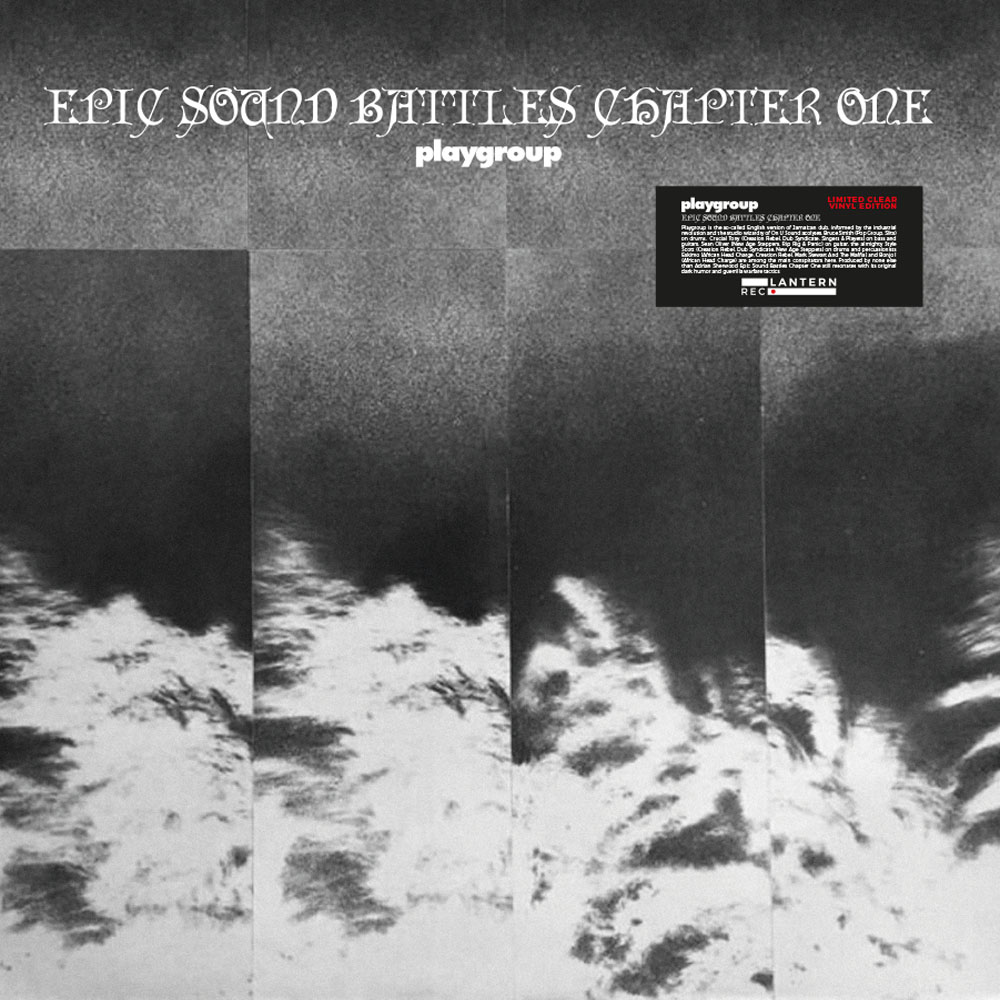 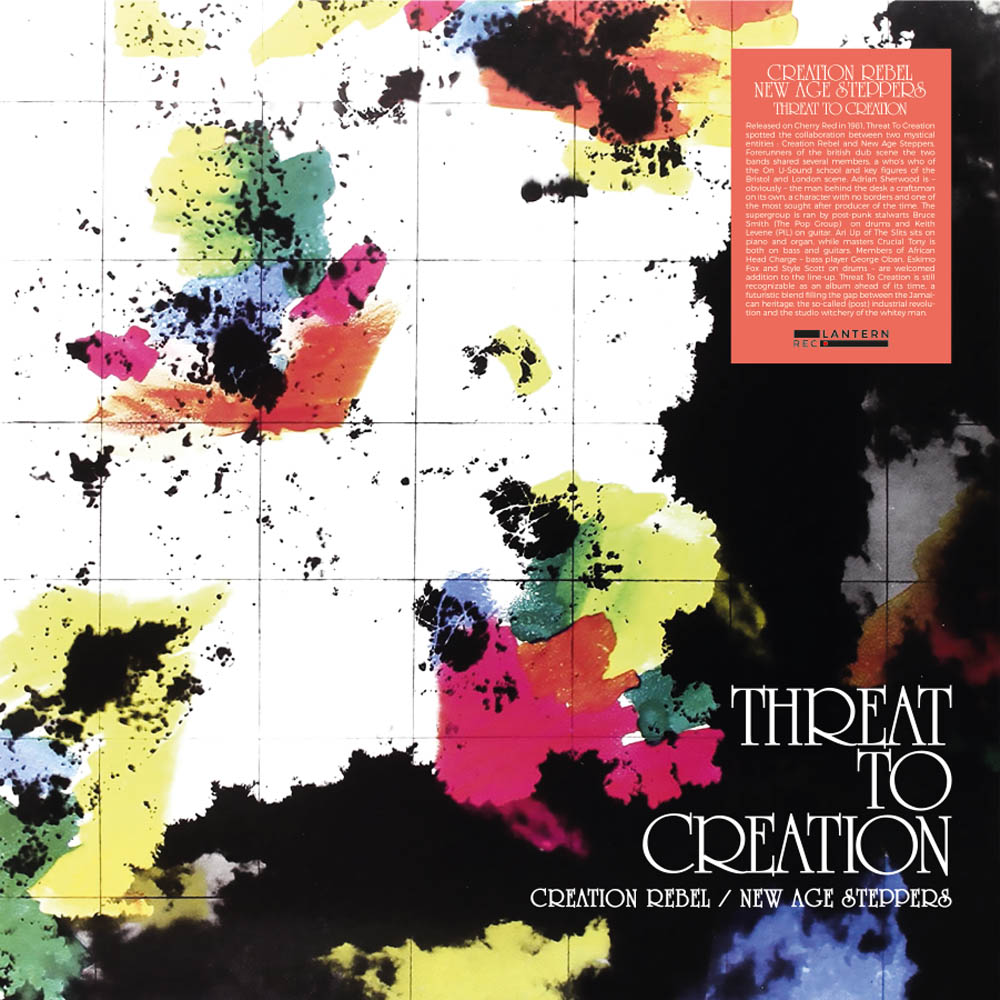 Released on Cherry Red in 1981, Threat To Creation spotted the collaboration between two mystical entities : Creation Rebel and New Age Steppers. Forerunners of the british dub scene the two bands shared several members, a who’s who of the On U-Sound school and key figures of the Bristol and London scene. Adrian Sherwood is – obviously – the man behind the desk a craftsman on its own, a character with no borders and one of the most sought after producer of the time. The supergroup is ran by post-punk stalwarts Bruce Smith (The Pop Group)  on drums and Keith Levene (PIL) on guitar. Ari Up of The Slits sits on piano and organ, while masters Crucial Tony is both on bass and guitars. Members of African Head Charge – bass player George Oban, Eskimo Fox and Style Scott on drums – are welcomed addition to the line-up. Threat To Creation is still recognizable as an album ahead of its time, a futuristic blend filling the gap between the Jamaican heritage, the so-called (post) industrial revolution and the studio witchery of the whitey man. 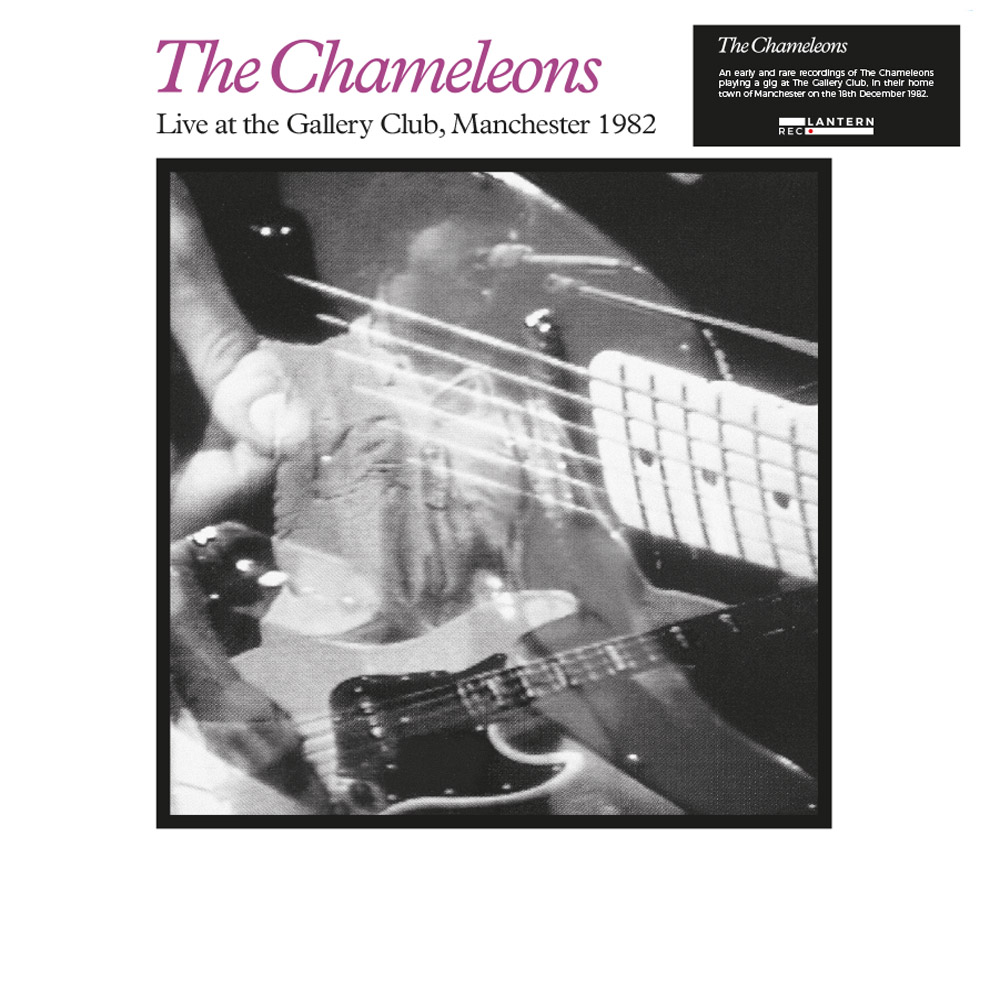 An early and rare recordings of The Chameleons playing a gig at The Gallery Club, in their home town of Manchester on the 18th December 1982. 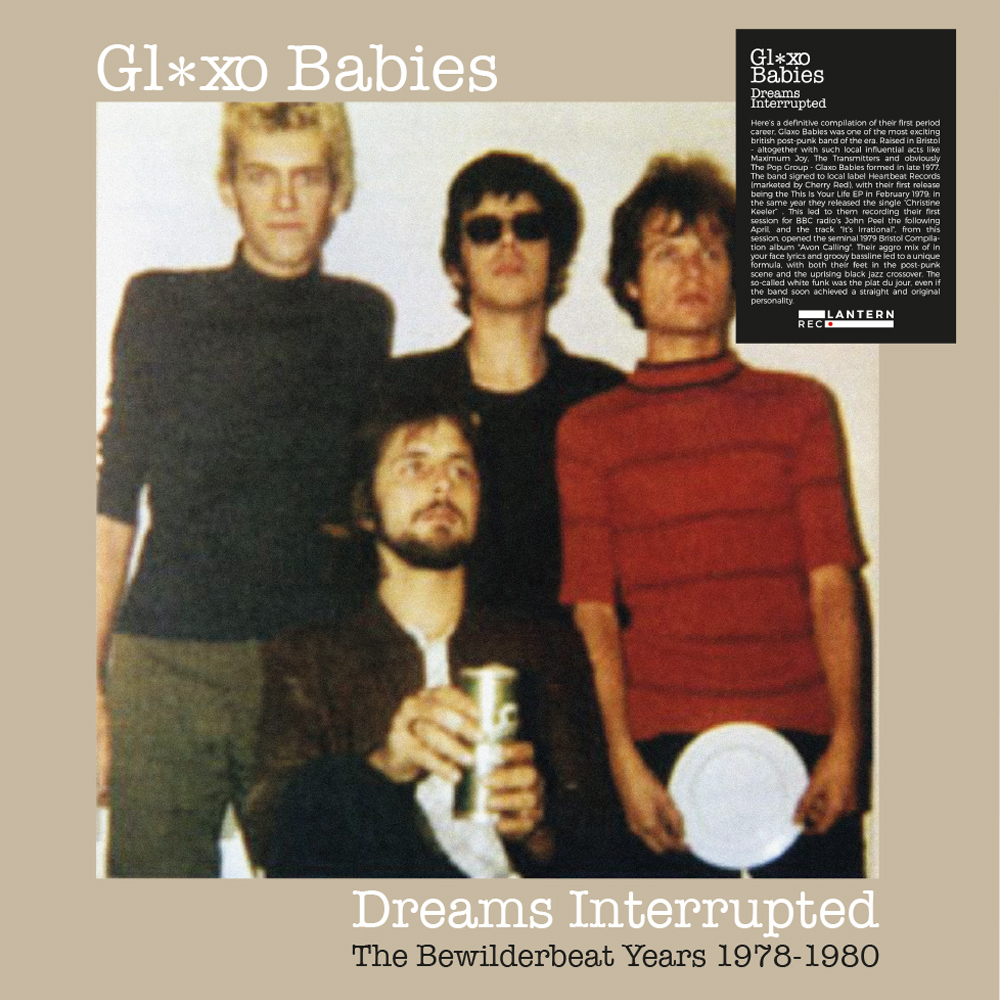 Here’s a definitive compilation of their first period career, Glaxo Babies was one of the most exciting british post-punk band of the era. Raised in Bristol – altogether with such local influential acts like Maximum Joy, The Transmitters and obviously The Pop Group – Glaxo Babies formed in late 1977. The band signed to local label Heartbeat Records (marketed by Cherry Red), with their first release being the This Is Your Life EP in February 1979; in the same year they released the single “Christine Keeler” . This led to them recording their first session for BBC radio’s John Peel the following April, and the track “It’s Irrational”, from this session, opened the seminal 1979 Bristol Compilation album “Avon Calling”. Their aggro mix of in your face lyrics and groovy bassline led to a unique formula, with both their feet in the post-punk scene and the uprising black jazz crossover. The so-called white funk was the plat du jour, even if the band soon achieved a straight and original personality. 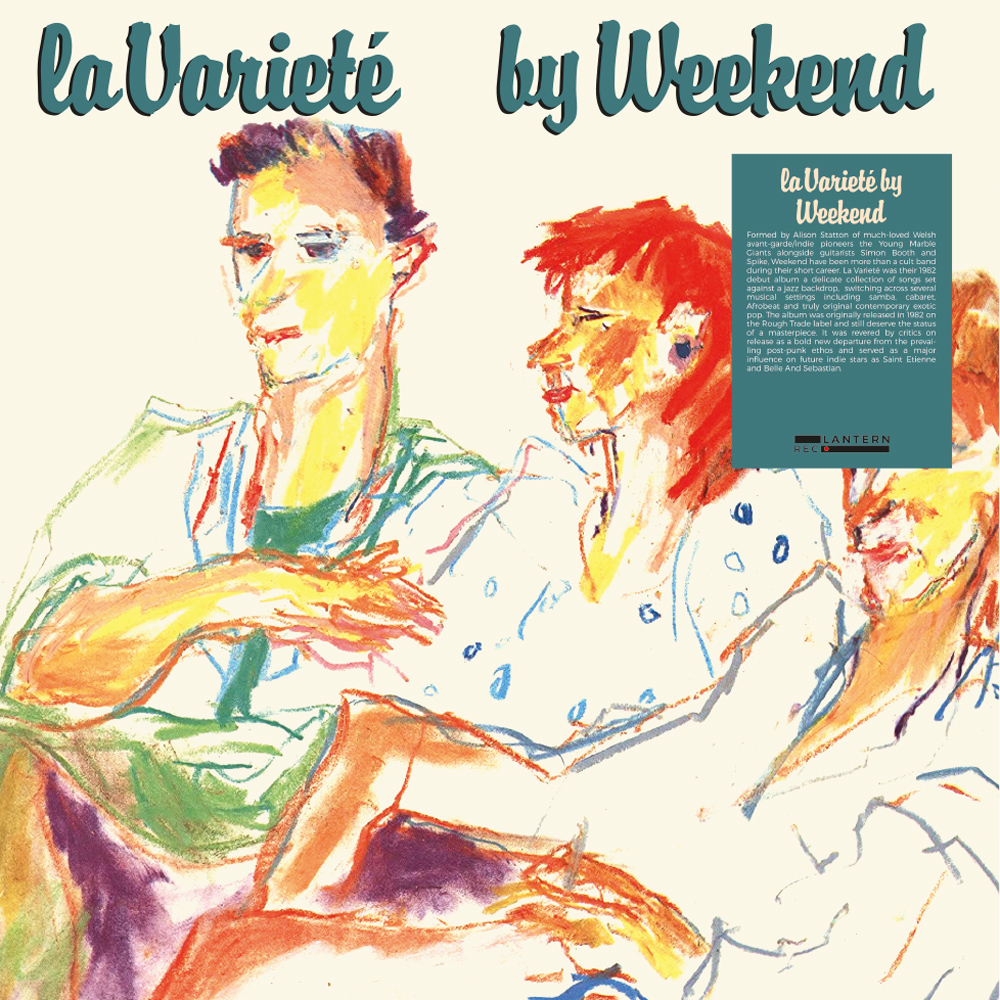 Formed by Alison Statton of much-loved Welsh avant-garde/indie pioneers the Young Marble Giants alongside guitarists Simon Booth and Spike, Weekend have been more than a cult band during their short career. La Varieté was their 1982 debut album a delicate collection of songs set against a jazz backdrop, switching across several musical settings including samba, cabaret, Afrobeat and truly original contemporary exotic pop. The album was originally released in 1982 on the Rough Trade label and still deserve the status of a masterpiece. It was revered by critics on release as a bold new departure from the prevailing post-punk ethos and served as a major influence on future indie stars as Saint Etienne and Belle And Sebastian

Welcome to the world of Bonfire Record, here you’ll find a comfortable place for some delightful and truly passionate album. Long lost but not forgotten some might say. The pure essence of acid folk, some brilliant choral pop, proto-prog eclecticism and even white man blues. Get ready to be surprised, release after release. Take your time for dreaming, this must be a beautiful place. 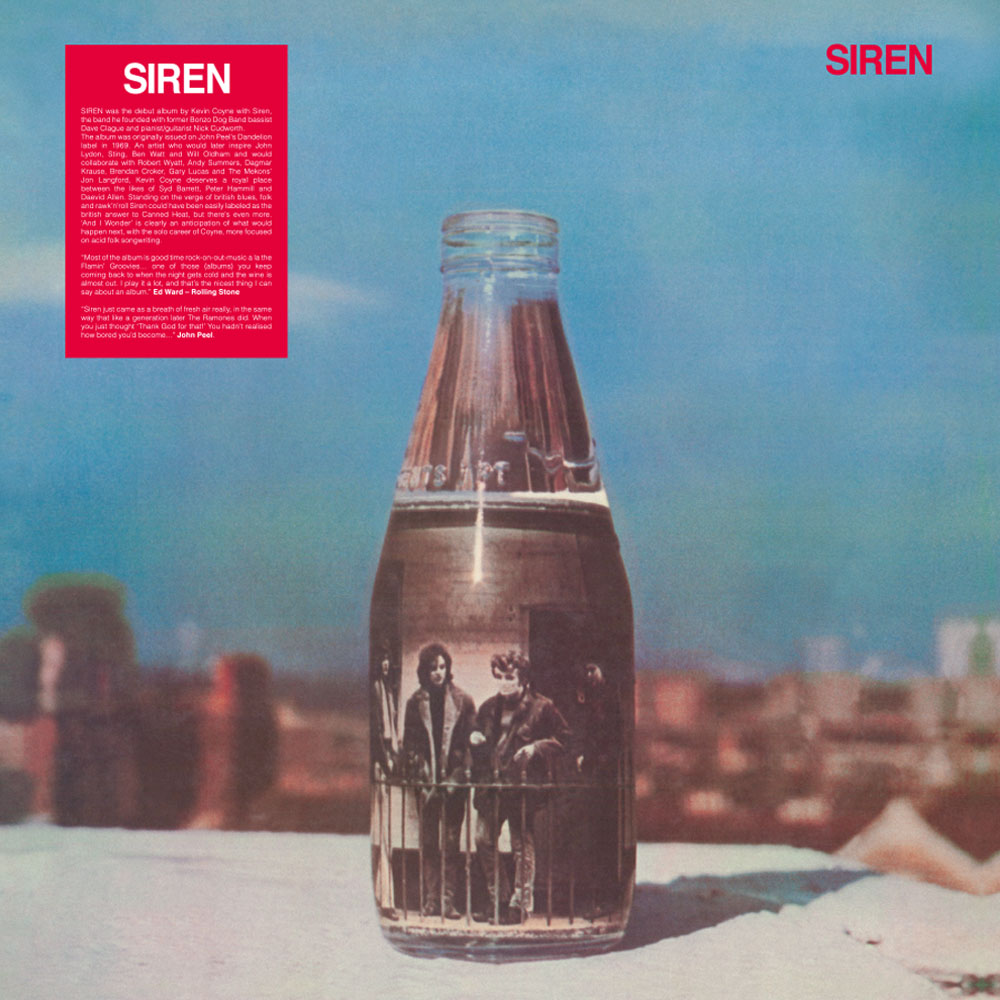 SIREN was the debut album by Kevin Coyne with Siren, the band he founded with former Bonzo Dog Band bassist Dave Clague and pianist/guitarist Nick Cudworth. The album was originally issued on John Peel’s Dandelion label in 1969. An artist who would later inspire John Lydon, Sting, Ben Watt and Will Oldham and would collaborate with Robert Wyatt, Andy Summers, Dagmar Krause, Brendan Croker, Gary Lucas and The Mekons’ Jon Langford, Kevin Coyne deserves a royal place between the likes of Syd Barrett, Peter Hammill and Daevid Allen. Standing on the verge of british blues, folk and rawk’n’roll Siren could have been easily labeled as the british answer to Canned Heat, but there’s even more. ‘And I Wonder’ is clearly an anticipation of what would happen next, with the solo career of Coyne, more focused on acid folk songwriting.

“Most of the album is good time rock-on-out-music a la the Flamin’ Groovies… one of those (albums) you keep coming back to when the night gets cold and the wine is almost out. I play it a lot, and that’s the nicest thing I can say about an album.” Ed Ward – Rolling Stone

“Siren just came as a breath of fresh air really, in the same way that like a generation later The Ramones did. When you just thought ‘Thank God for that!’ You hadn’t realised how bored you’d become…” John Peel. 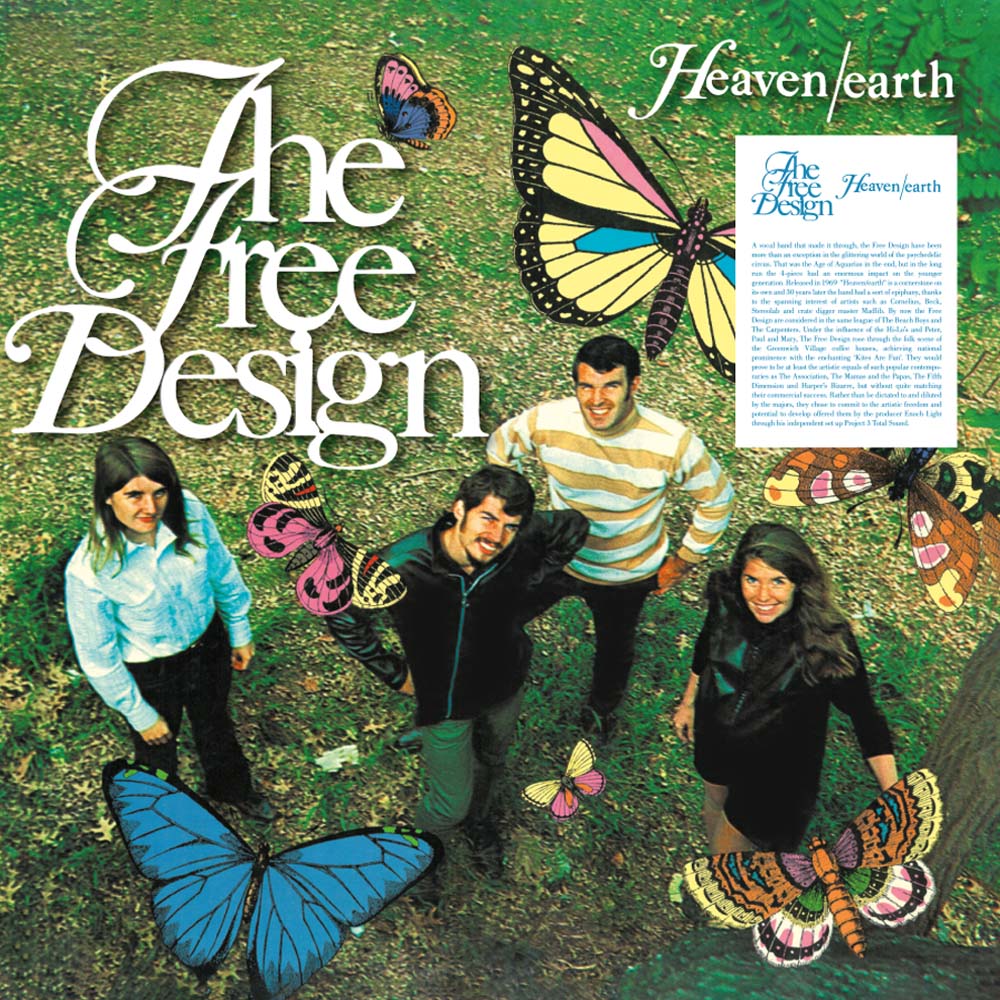 A vocal band that made it through, the Free Design have been more than an exception in the glittering world of the psychedelic circus. That was the Age of Aquarius in the end, but in the long run the 4-piece had an enormous impact on the younger generation. Released in 1969  “Heaven/earth” is a cornerstone on its own and 30 years later the band had a sort of epiphany, thanks to the spanning interest of artists such as Cornelius, Beck, Stereolab and crate digger master Madlib. By now the Free Design are considered in the same league of The Beach Boys and The Carpenters. Under the influence of the Hi-Lo’s and Peter, Paul and Mary, The Free Design rose through the folk scene of the Greenwich Village coffee houses, achieving national prominence with the enchanting ‘Kites Are Fun’. They would prove to be at least the artistic equals of such popular contemporaries as The Association, The Mamas and the Papas, The Fifth Dimension and Harper’s Bizarre, but without quite matching their commercial success. Rather than be dictated to and diluted by the majors, they chose to commit to the artistic freedom and potential to develop offered them by the producer Enoch Light through his independent set up Project 3 Total Sound. 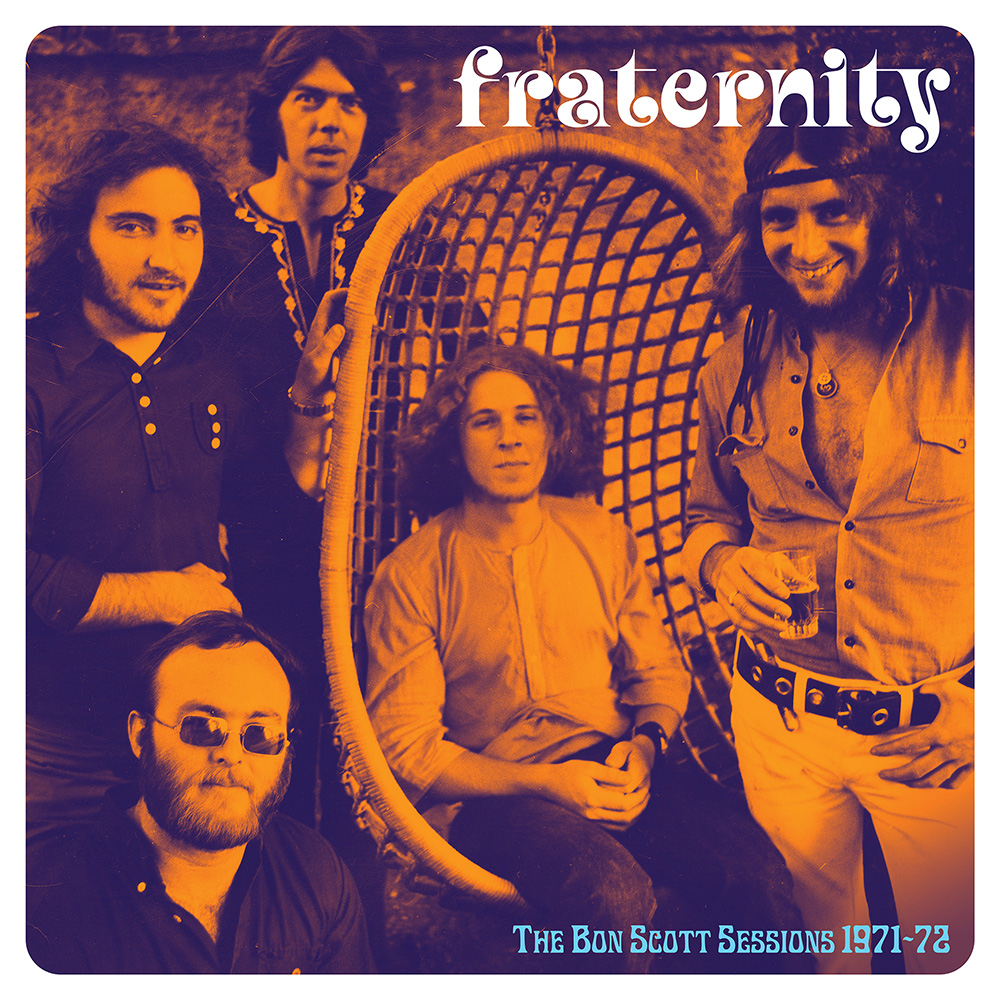 Fraternity were an Australian rock band formed in Sydney, 1970. Formerly four members of the Levi Smith’s Clefs, John Bisset on keyboards, Tony Buettel on drums, Bruce Howe on bass guitar and vocals, and Mick Jurd on lead guitar. Due to conflict at the time with their front-man, Barry McAskill, the group abandoned him and relocated to Adelaide in 1971 to restart their career as Fraternity on the Sweet Peach label. Fraternity’s debut release was a cover of The Moody Blues track “Question” backed with an Ashdown/Stewart song “Why Did It Have To Be Me?”. While the band had competent recording vocals, they were lacking a definitive front-man. Bon Scott at the time was performing with a group called The Valentines. The band liked his raw energy and felt that he would be a good addition to the band. After some persuasion, Bon agreed to relocate and joined them as lead singer. The band’s biggest local hit was a cover of Blackfeather’s “Seasons of Change” which peaked at No.1 in Adelaide. In 1971, Fraternity went on to win the Hoadley’s Battle of the Sounds. Bon Scott’s previous band, The Valentines, had been a finalist in this competition two years earlier. Fraternity were now being touted as “The Next Big Band” and the competition prize was a free trip to London. However, this trip would go on to be the end of Fraternity as we know it. 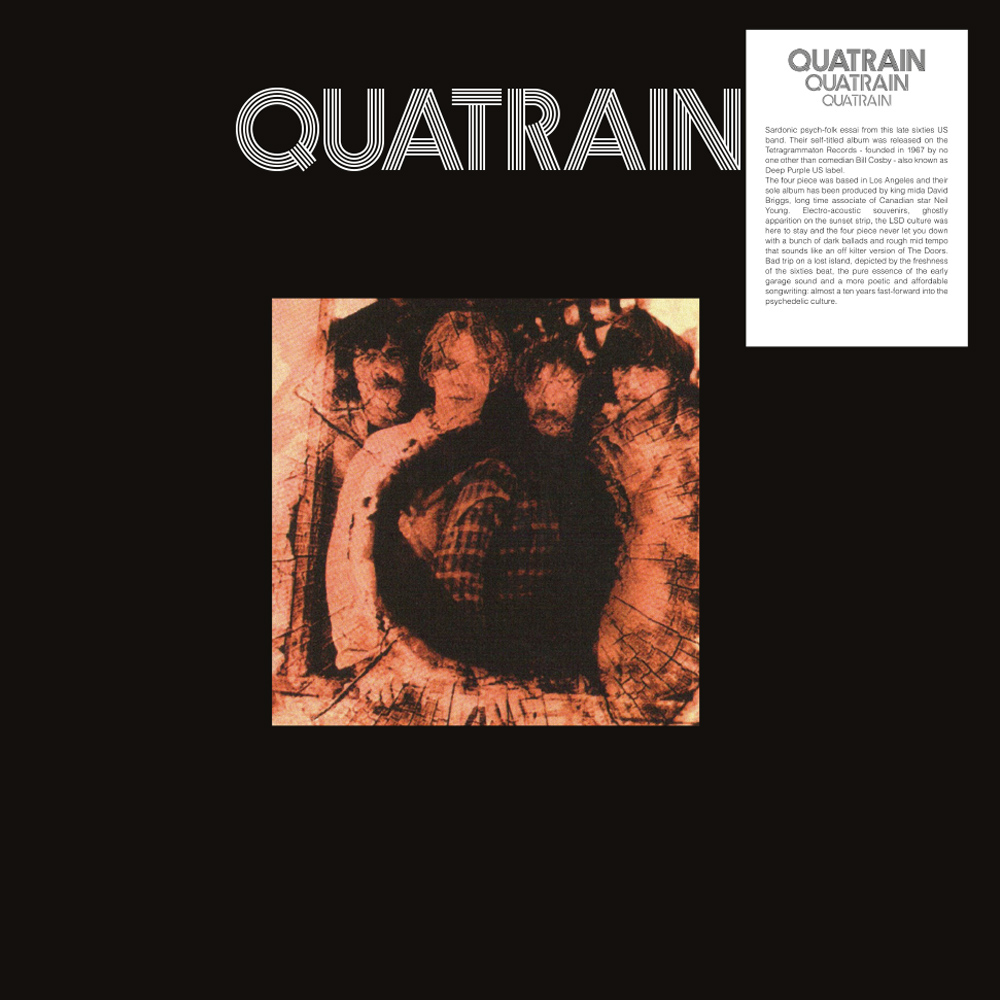 Sardonic psych-folk essai from this late sixties US band. Their self-titled album was released on the small imprint Tetragrammaton Records a subsidiary of The Campbell Silver Cosby Corporation founded in 1967 by no one other than comedian Bill Cosby.

The four piece was based in Los Angeles and their sole album has been produced by king mida David Briggs, long time associate of canadian star Neil Young. Electro-acoustic souvenirs, ghostly apparition on the sunset strip, the lsd culture was here to stay and the four piece never let you down with a bunch of dark ballads and rough mid tempo that sounds like an off kilter version of The Doors. Bad trip on a lost island, depicted by the freshness of the sixties beat, the pure essence of the early garage sound and a more poetic and affordable songwriting: almost a ten years fast-forward into the psychedelic culture. 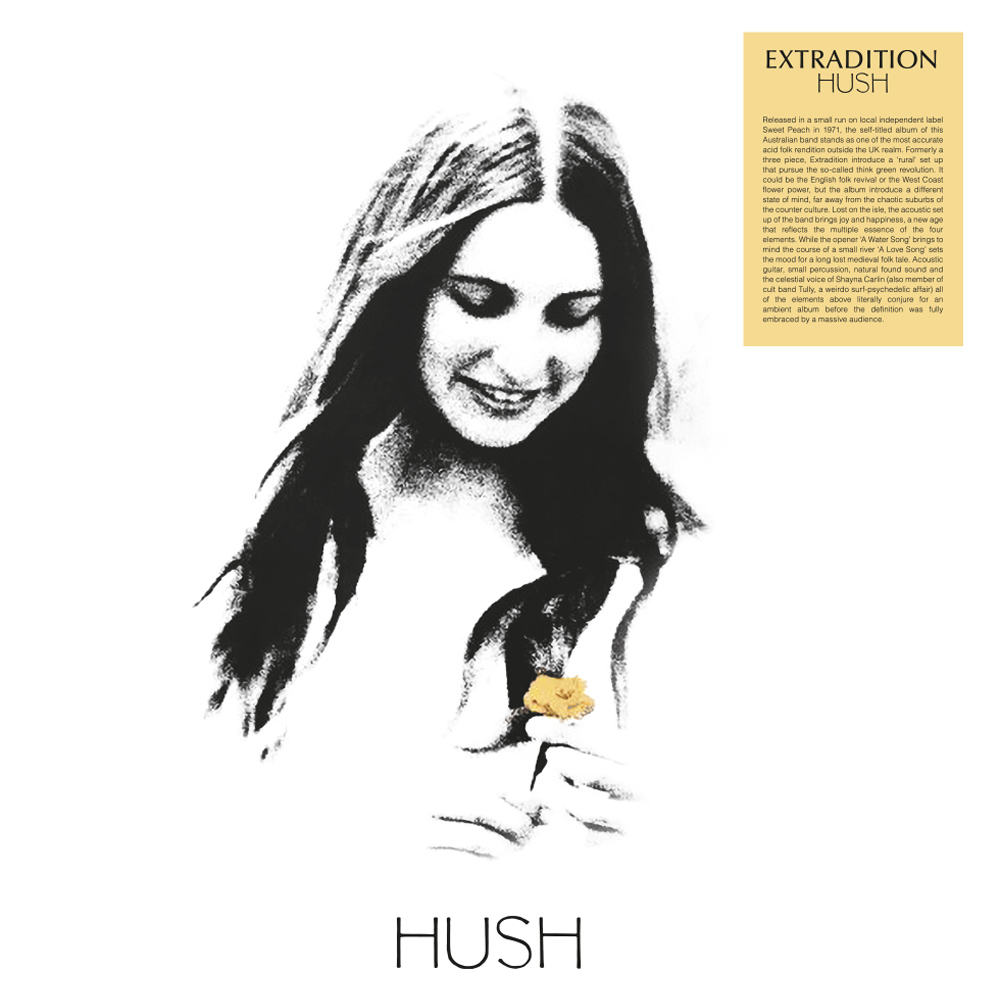 Little we know about this long lost gem coming from the outskirts of the Commonwealth. But as far as we know, beautiness lies inside. That is the case of the sole album of mysterious australian band Extradition. Released in a small run on local independent label Sweet Peach in 1971, the self titled album stands as one of the most accurate acid folk rendition outside the UK realm. Formerly a three piece Extradition struggle on their personal behavior forging a rural set up that pursue the ‘think green’ revolution. It could be the English folk revival or the West Coast flower power, but the album introduce a different state of mind, far away from the chaotic suburbs of the counter culture. Lost on the isle, the acoustic set up of the band brings joy and happiness, a new age that reflects the multiple essence of the four elements. While the opener ‘ A Water Song’ brings to mind the course of a small river ‘A Love Song’ sets the mood for a long lost medieval folk tale. Acoustic guitar, small percussion, natural found sound and the celestial voice of Shayna Carlin (also member of cult band Tully, a weirdo surf-psychedelic affair) all of the elements above literally conjure for an ambient album before the definition was fully embraced by a massive audience. 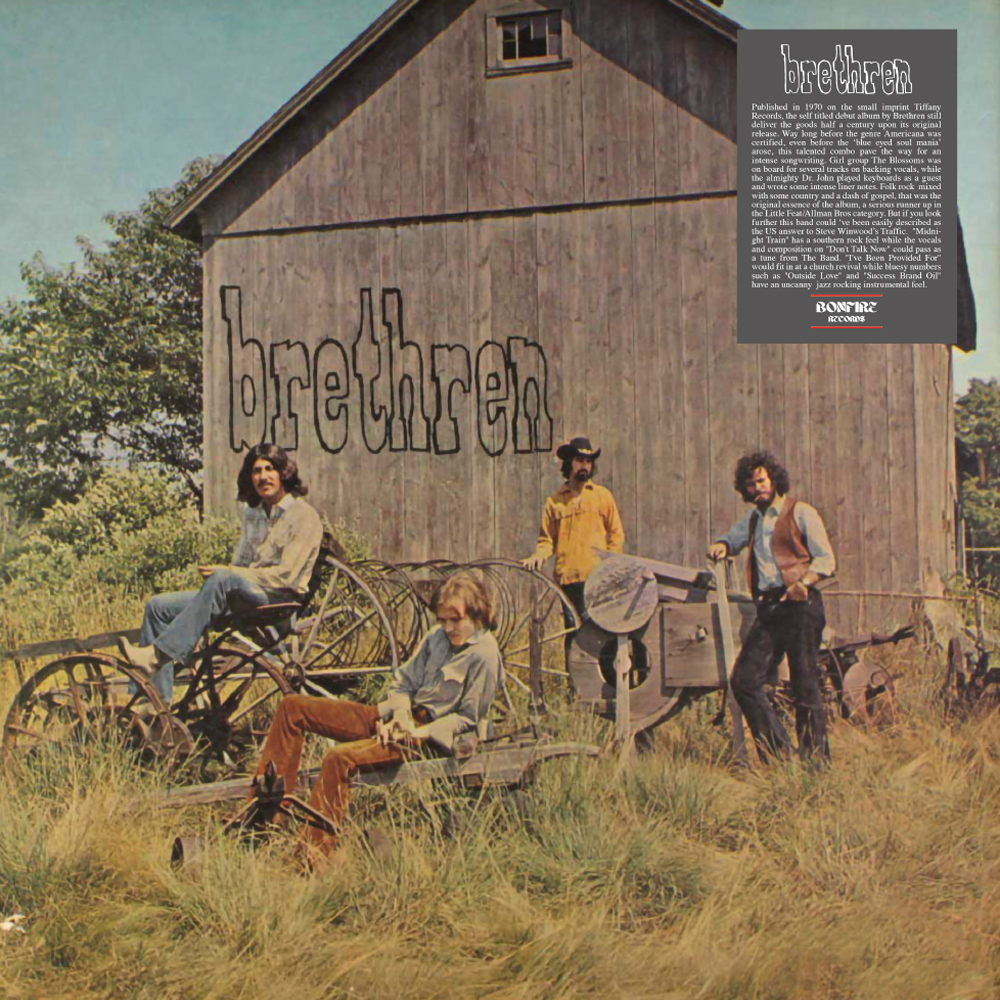 Published in 1970 on the small imprint Tiffany Records, the self titled debut album by Brethren still deliver the goods half a century upon its original release. Way long before the genre Americana was certified, even before the ‘blue eyed soul mania’ arose, this talented combo pave the way for an intense songwriting. Girl group The Blossoms was on board for several tracks on backing vocals, while the almighty Dr. John played keyboards as a guest and wrote some intense liner notes. Folk rock mixed with some country and a dash of gospel, that was the original essence of the album, a serious runner up in the Little Feat/Allman Bros category. But if you look further this band could ‘ve been easily described as the US answer to Steve Winwood’s Traffic. “Midnight Train” has a southern rock feel while the vocals and composition on “Don’t Talk Now” could pass as a tune from The Band. “I’ve Been Provided For” would fit in at a church revival while bluesy numbers such as “Outside Love” and “Success Brand Oil” have an uncanny jazz rocking instrumental feel.